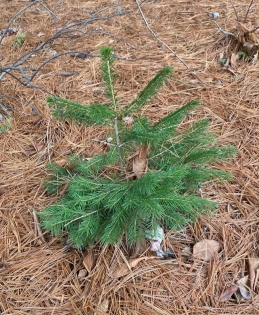 Happy New Year! This is the month named for Janus, the Roman god of gates and transitions, who looks backward and forward at the same time. In my front yard this morning under the  wide spreading branches of my big old pine tree, rooted in the past, this new little sprout of a tree faces the future. Janus looks out in both directions, but he occupies the middle ground – a position we could use a lot more of these days. It’s interesting that the Greeks, whose gods the Romans generally paralleled, have no similar god. The Greeks invented Democracy. I hope that’s not a portent.

The hipposquirrelamus has made an interesting sculpture while fattening himself on my second pumpkin. He ran away when he saw me, but I wondered where the chipmunks were. In November they were running up and down the yard with their cheeks stuffed out, but I never saw where they took their loot. Unlike the hipposquirrelamus that continues to forage all winter, chipmunks hibernate. They are said to build burrows as much as 12 feet long, with many entrances and separate pantries, sleeping areas, and trash dumps. This sounds way too organized for critters that rush around as chaotically as chipmunks do, but then there are those cheeks. They wouldn’t need capacious carryall cheeks if they didn’t have a plan. Being natural travelers through the underworld, they have co-evolved with various of the foods they gather, for instance spreading spores of fungi. Especially truffles.

So there are the smart and tidy chipmunks, holed up  in their burrow mansions eating truffles, while the deer, possums, and raccoons tromp through the winter scrounging. This explains why the plants that stay green in winter here are the ones critters do not eat. The ajuga looks luscious to me but not to the wildlife, after a week when the temperature fell all the way down and off the thermometer. That’s what zero degrees means, right?

And here’s the hellebore, not just surviving but planning to bloom before spring comes. Being repellent to mammals is the way to go if you’re a small, low-growing plant that stays green in a Michigan winter.

The poinsettias I saved from last year spent the summer outside and dropped many leaves when I brought them in, but now have recovered to holiday glory.  After many struggles with mealybugs, to which over-wintered poinsettias are sadly susceptible, I now have an actual houseplant tip for you. For a minor infestation, mix one quarter cup of rubbing alcohol with a cup of water, dip a cotton ball into it, and dab directly onto the little white mealybug clumps. For a major infestation, mix the same proportions of water and rubbing alcohol in a big batch, add a little dishwashing liquid, and spray the plant all over with it. Works better than anything else I’ve tried. 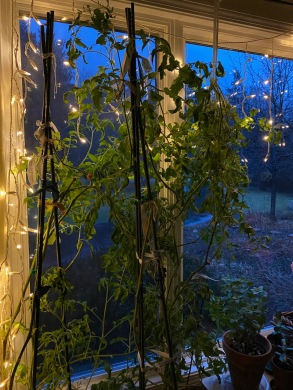 I also used this on my indoor tomatoes, the other victim of mealybugs. Direct application worked better for them, because they grow in big heavy flowerpots that can’t be picked up and set in the kitchen sink to be sprayed. Spraying them as they sat among my books, furniture, and Christmas lights wasn’t a great idea. So, dab it was. The new green tomatoes are reaching the full 2-inch “salad size” they were meant to be before ripening, unlike the pre-treatment tiny red tomato you see here, which was hard as a rock.  Definitely worth fixing.