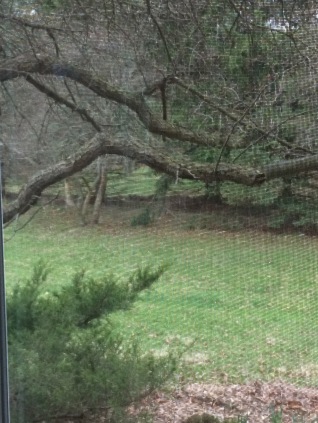 I was sitting in my studio working on projects and playing online spider solitaire, when I heard a bump, bump, bump behind me. Zerlina was asleep, no one else was home, and the wind wasn’t blowing. The bump sounded vaguely familiar, but before I could place it I turned around and discovered the source: a robin was attacking its reflection in the window.

I understand it from the robin’s point of view – there he was, flying peacefully toward a tree outside a window, a good spot to build a nest, when suddenly another robin appeared flying straight at him. Outrage! He attacked! And immediately, the other robin attacked him exactly the same way! Intolerable!

Fortunately, the noise woke Zerlina, who jumped up onto the table under the window. The robin, finding a cat apparently in the tree, backed off. But only as far as the next window. Thus began my spring ritual, carrying my cat around from window to window following the robin, holding up my pointy-eared would-be slaughterer to dissuade the bird from knocking itself out against my windowglass.

Zerlina doesn’t really like to be carried around, but she does like watching birds. She glanced back at me as if to say, just let me out there and that bird will never bother you again. An indoor cat now, she remembers her days on the street. 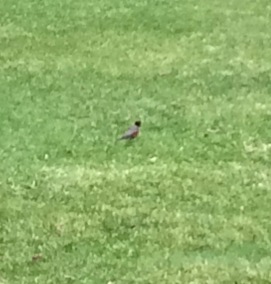 How many generations will it take for birds to understand windowglass? Surely there’s a survival advantage to not flying smack into them on purpose like this, beating your brains out and wasting energy on something that’s no threat at all instead of getting on with life, building a nest, or finding a mate, or singing. What kind of ridiculous species would do something like that?

April’s here, a month of many seasons. Yesterday we had snow, today we have brilliant sun, and tomorrow could be anything. No wonder it starts with a Fools’ Day. 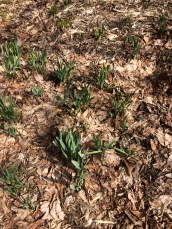 Sometimes it hosts the wandering holidays of Easter and Passover, but it’s not committed to them.

April aspires to spring, and carries the mantle of expectation so far as to encompass both Earth Day and National Poetry Month. It is famous for rain. Chaucer begins his Canterbury Tales with it: “Whan that Aprille with his shoures soote…” Children sing “April showers bring May flowers.” But daffodils bloom in April, so presumably Wordsworth wrote about those crowds of them in an April past. Forsythia delivers “spring’s yellow telegram” in April, and the hellebores that 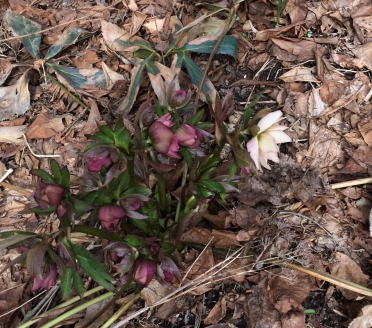 nosed up in March are April openers.

But April flowers don’t always bring happiness. When Edna St.Vincent Millay lost a loved one in April she wrote, “April/ Comes like an idiot, babbling and strewing flowers.” T.S. Eliot called April the cruelest month. Its position as Child Abuse Prevention Month would seem to agree with that.

I spent parts of several Aprils in Chile, where they ushered in the autumn. Spring had to wait for October.

April also hosts International Pillow Fight Day. Imagine an international pillow fight: opposing border guards toe to toe with bolsters; or maybe two guys with huge pillows flinging them across an ocean. Or over a wall. That one seems quite independent of season, though, so it would work in any hemisphere. And in any hemisphere, a day dedicated to learning to fight softly seems like a good idea.