Doug told me how, a college kid in 1972, he and some friends drove from New Jersey to the Gaspe Peninsula to try to see a total eclipse in bad weather, diverting across Nova Scotia to Cape Breton Island at the last minute, getting there just in time to see the sun eclipsed by the moon, before the whole shebang was eclipsed by the storm.

I told him I’d never seen a total eclipse, but had seen several partial eclipses that went pretty far. Nothing like it, he said; I have to take you to see this one.

Okay, well, he’s an astronomer, he’s picky about this kind of thing. I remember once being hauled out of bed at 2 a.m. to see a fuzzy comet, and being fairly unimpressed. But with his previous weather experience in mind, Doug proposed a trip to dry western Idaho for this eclipse, and I love western road trips so I was happy to sign on. We flew to Boise, and after a lovely drive through Idaho and Montana (another story), returned to Boise pre-eclipse.

Weiser, Idaho, just over an hour’s drive northwest of Boise, is a town of about 5,000 people. They put on an annual fiddle contest bringing in thousands more every June, so they know how to handle crowds. We headed up to the high school athletic field, where they had parking, restrooms,

breakfast burritos, and lots of open space. A large section was fenced off for tent campers, most of whom had come for the whole weekend, which was good for the day-trippers among us. We’d been warned of massive traffic jams, but they did not materialize.

There was plenty of space to suit all endeavors. Some people set up tripods and cameras with clock-drives;

some propped hand-made pinhole projectors on the ground; some spread blankets, ate snacks, and chatted. The field was edged with a single row of sycamore trees, and we sat in the shade of one and leaned back against its trunk, waiting for the show. The sky was clear, the sun high above the horizon. We watched people goofing around in their dark eclipse glasses, and got up to check the sun now and then.

When it started, it was just like all those partial eclipses: the sun was a flat cookie, with a small, symmetrical bite taken out of it. I checked periodically as the bite got bigger, and watched it in the sun-dapples under the trees, too.

The sycamores had big leaves that didn’t make good pinholes, so the images were blurry.

I interlaced my fingers, making small spaces between them, but the grass was rough and the images still blurry. So I put some white paper down on a flat spot, and cast my shadow on that. Much better. But still not different from a partial eclipse.

Doug said it would be hard to look away from the sun as it was about to eclipse,

The sun and the moon in Doug’s hand

but if I turned the other way at the right moment I would see the moon’s shadow coming toward us from the west, about 70 miles wide and barreling toward us at something like 2,000 miles an hour.

Okay, this was different from a partial eclipse. I couldn’t imagine it, so I thought I’d be sure to look.

Everyone was standing now, out from under the trees, like an army of sunflowers, all turned to the same spot in the sky, and all wearing cardboard eclipse glasses as though we were at a giant, outdoor 3-D film festival. All except Doug, who was turned the other way, looking for the shadow. The descending cool and darkness was at the level of a heavy thunderstorm about to let loose, but there wasn’t a cloud in the sky. This was extremely unsettling to me, but Doug was wreathed in smiles.

“Here it comes,” he said, and here it came: a huge, blue-grey shadow rolling over the low hills west of us, crazily, disconnected from the sun, from the moon, from reality, as it seemed, though in fact they were its cause and anchor. It looked like we might all drown in it. It looked determined. I turned back to the sun, flipping my glasses down, and saw the last limb of sunlight flare out, looking like what they call it, a diamond ring, caught in the glare of a photographer’s flash. And then the day went dark. The air went cold. We all took off our glasses in a single movement, and a shout, a cheer, went up from the entire crowd, for the moon, for the predictive ability of science, for the rim of fire edging the hole in the sky where the sun had vanished, well-explained to us all, but feeling mysterious all the same. It was about 11:25 in the morning, but we could see the stars. 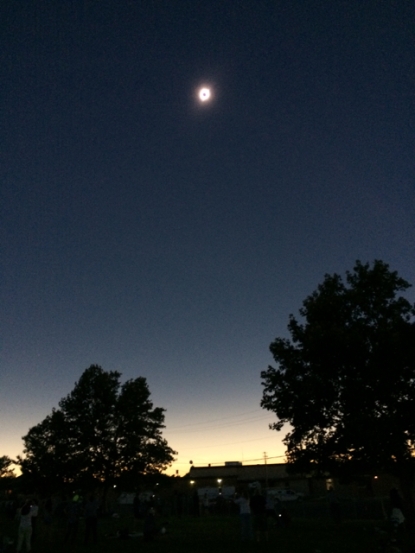 For two minutes, bare-eyed, we all stared together at this absence of the everyday, relieved by science of the terror so we could appreciate the glory: rays of white gold shooting out from behind the moon in every direction except toward us, a crown for the moon’s effort. We lifted our phones and cameras and toasted the universe with happy picture-taking: congratulations on your beautiful achievement. I will certify it on my facebook page. We smiled as though our efforts had anything to do with it.

Then the diamond burst out on the other side of the ring, and we all put our glasses back on for one more look as daylight began to return. There was still plenty of partial to see as the moon slid away, but few stayed to watch this anticlimax. We were all in it together watching the well-named totality, abetting each other in that huge cheer; but now that the moment of ecstasy had passed we drew back into our own groups and couples, engaged in smaller circles again, packing up gear to go. That was when the traffic jam happened.

It was a good bet that the lovely and polite people who directed us to our parking spot, fixed us hotdogs, and pointed us to coffee, tea, and bathrooms, did 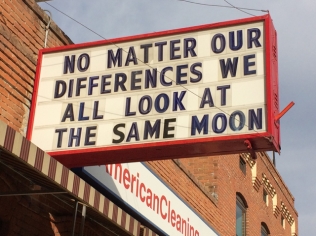 not share my opinions on political issues. This was red Idaho, and Ann Arbor’s very blue. But during the eclipse we all saw the same facts, the same way. If there was an alternative version of a total eclipse, I still haven’t heard about it. There was solidarity in that mammoth cheer. It was a shared moment between the universe and humanity, when we were all in it together and were fine with that. Doug was completely right. It was not like anything else.

Summer’s been mild and lovely, but the tomatoes are not thrilled. They’re out there sulking, reddening at a grudging rate while the bacon sits forlornly in the fridge and the pasta sleeps alone. One or two small ones ripen per day, barely enough to decorate a salad, not big enough to cut into slabs and slide into mayonnaise.

Tomatoes want heat. They remember their domestication by Aztec farmers, the tropical, pouring sunlight they were bred for; they have forgotten the cool mountain home of their ancestors in the Andes, where tomatoes still grow wild on tangled vines. Tomatl, said the Aztecs, close enough to understand in Michigan today. What cooler word did the Inca have for them? Give them summer heat and they distill its flavor into red flesh, summer in a thin, flaming skin. Imagine how it burst on the tongue of the first Italian chef bold enough to try it, in the kitchen of a Medici perhaps, when Europe thought it was poisonous. Tomatoes were found to need no antidote. My tomatoes are moping, but they will come through. It’s just going to take a little longer than usual.

They varied in age, size, and attitude. So did the men. There were twelve men, one huge dumptruck, two bobcat loaders, a roller, two pickups with trailers to carry the bobcats and roller, and the huge paving machine itself, like something out of Hieronymus Bosch, or at least Dante’s Inferno. The dumptruck fed lumpy black chunks into the paver and a smooth, black, steaming driveway appeared beneath and emerged behind it. Men not running the machines tended the edges with shovels and strange long-handled tools.  There was a burnt reek in the air.

They had already ripped up the old, crumbly asphalt from the driveway, laid down gravel, and rolled out a first layer of new pavement while I was busy elsewhere. The lavender and thyme once draped so gracefully over the edge of the asphalt, softening it, were cut back, prepped for surgery. Now I was here to watch the final layer go on.

The men and the trucks worked together seamlessly, and wordlessly for the most part, since the machinery made enough noise for all participants. My cat had already lit out for a quieter territory, but I was sure if my grandson were here he’d be fascinated by the whole thing. My kids, at that age, would have wanted to get out in the middle of it, directing traffic. I was fascinated by it myself.

Because this is truly human stuff: how we have extended our puny strength to rock-moving, road-building proportions. True, this has led us to some big mess-ups on our planet. But we can imagine and follow a plan of both brute force and intricacy, moving tonnage while placing 45-degree bevelled edges exactly where the lavender and thyme stop. Maybe we can learn to fix our planetary mess-ups. How many have to agree before we can start?