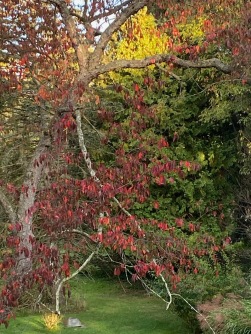 The month of October continues, strangely, with no frost predicted. Some of the trees have decided to go for fall, and some are waiting to see what happens. The zinnias are holding their own, and the morning glories, which held off all summer, finally decided to bloom. This amazed me when it happened last time, but now I have a theory: the black cherry tree at the west end of the deck must have been shading them more than I thought. When it loses its leaves, the afternoon sun gets through and the morning glories wake up. That’s my theory, and since I’m not going to test it by gluing the leaves back on or throwing a shade cloth up there, my theory will remain untested, and therefore unfalsified. 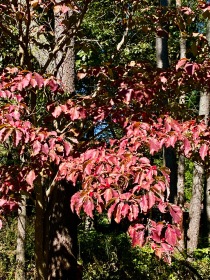 So, the black cherry votes for fall, the dogwood agrees, the morning glories and zinnias say no. 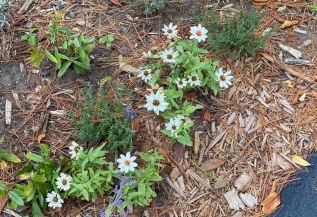 I decided to bring in the plants that were out for the summer in any case, now, before they feed any more critters. I took them into the garage and sprayed them with soapy water, hoping not to bring insect life into the house with them. Now begins my game of Musical Windowsills, trying to fit light levels to plant happiness, and care needs to convenience of location. I will change my mind about this several times before spring comes back to liberate them all. 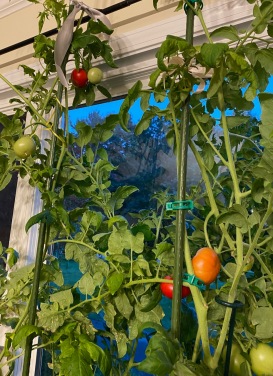 Meanwhile, my hothouse tomatoes have been living it up on a windowsill all summer. Remember the hothouse tomatoes? They looked so modest on the windowsill in June. Well, modest no more. They take up a lot of real estate but the payoff is delicious. Vine ripened. We’ll see how that goes as winter gives us get fewer and fewer hours of sun. 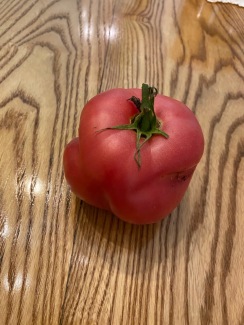 And while we’re on the subject of tomatoes, here’s a cautionary tale from the still-producing outdoor tomato beds. Suppose you got pushed into a corner, and spent your whole life growing there. You could come out looking like this square tomato. Some might call you a misfit; others might be intrigued to learn your story. If it comes down to a matter of taste, I can tell you it tasted magnificent. Just like the round tomatoes did. 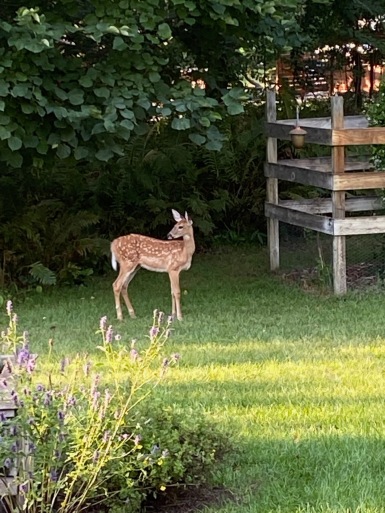 As we get further into fall there’s less for the critters to eat and they get bolder. One came right up on my deck the other night, ate an entire tall, twelve-inch potful of flowering impatiens down to nubs, and had a few petunias and geraniums for dessert. At first I blamed the woodchuck, but then noticed several zinnias bitten off, raggedly, at a height the woodchuck could not have reached. Deer. Most likely a fawn. The fawns that were tiny shaky newborns in mid July are now learning to eat on their own, with an underdeveloped sense of danger and an uninformed palate. The petunias and impatiens are tasty, but some of what they eat, like my Jasmine Tobacco, is poisonous. They seem to survive, but it can’t be good for them. 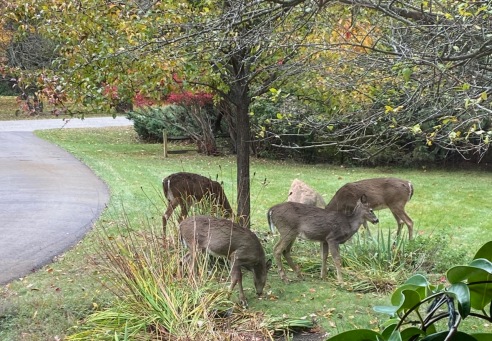 Then a night or two after that, a lot of terrible screaming woke me up about four in the morning. Was it the bunny? I’d never heard this high-pitched wail before. It sounded like it might have been two different animals, and it went on for some time before it stopped, or maybe I just fell back asleep. In the morning I looked all around the yard, the deck, the woods, for signs of a struggle. Nothing. No blood, fur, or feathers; nothing disturbed. I turned to the internet and checked out the recorded screams of cottontail rabbits – no; woodchucks – no; white tailed deer – aha! White tailed deer! And though it sounded painful, according to the hunter who posted the video in question, these were the calls of deer that had been disturbed into running in different directions, calling to each other to get the herd back together. Did the hunter really know that? Was it a rural myth? Since there are urban myths, it stands to reason there are rural ones. The only sound I’ve heard before from deer is the sort of “Huff” a stag makes, generally accompanied by a hoof stamp, to warn the rest of the herd to flee. 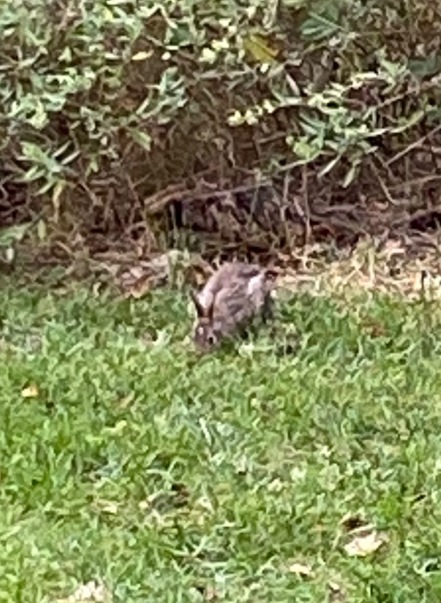 Whether it was a deer or not, it wasn’t the demise of my weed-eating helper bunny, because I saw her the next day. My bunny has a little white blaze on her forehead, very distinctive. I was feeling very smug about the Universe having endowed my back yard with a weed-eating helper bunny. Then I went out into the fenced garden to see how the last of the crookneck squash were coming along. They weren’t. Three tender little baby squash, a foot or two of vine, and many big fat juicy leaves had totally vanished. It was neat work – no messy broken bits a la squirrel, no neighboring plants knocked over a la woodchuck. Rabbits are extremely tidy when they are destroying crops and landscaping. 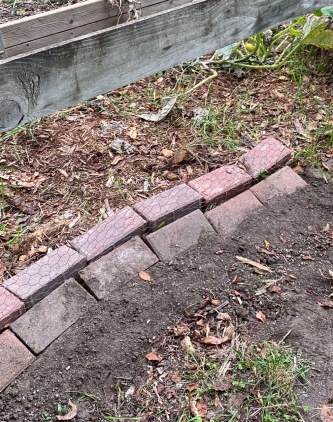 So I inspected the chicken wire around the base of the fence, and found the place where the wire had rusted out at ground level, and a shallow, bunny-size underpass had been excavated. My bunny must have been doing reconnaissance all summer, just in case. I believe the relevant phrase is, nevertheless she persisted. Her erstwhile entry now boasts a temporary patch of bricks on both sides of the chicken wire, sandwiching it in place, and Blaze the Bunny is back to eating weeds in the lawn.