It started, I believe, as an error on the squirrel’s part. He looped himself up over the fence and out of the garden, in his mouth a green tomato the same size, shape, and color as a walnut in its husk. If he tries to stash that for the winter, I thought, he’ll be disappointed.

But either he was indeed disappointed and kept coming back hoping for a different result, or he bit into it and found it as delicious as I do, because he has been in the garden regularly since then, conducting what seems to be a very thorough taste test: a bite here, a bite there, green, red, small, large. He never finishes any of them, but he ruins a great many.

So here’s the really odd thing – this doesn’t happen every year. I’m pretty sure I have the same squirrels, or mostly the same squirrels, every year. Do they forget about tomatoes over the winter? Do they only eat tomatoes when other food is scarce? If I threw a lot of walnuts into another part of the yard, would that keep the squirrels away from the garden, or reaffirm them in the notion that my yard has the best eats in town, or increase the local squirrel population? 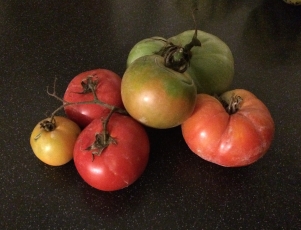 Meanwhile I spray hot sauce and critter repellent, which are resolutely washed off by rainstorms, and bring at least some of the tomatoes in before they’re ripe, for protection. And think up original imprecations against squirrels.

Before the eclipse, we detoured to see some dinosaurs. Montana apparently once teemed with them, and the Museum of the Rockies at Montana State University in Bozeman has more T. Rex fossils than anywhere else in the world. 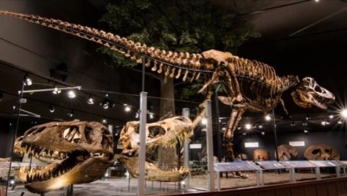 Hall of Horns and Teeth, Museum of the Rockies

They have fossils of loads of other dinosaurs, too, and every one of them was found in Montana, predator and prey, large and small, even babies and eggs, all the bones and shells turned to stone.

Dinosaurs have always seemed to me to explain a lot of legends. Imagine you are walking along an eroded cliffside or washed out streambed, and you stumble on one of these: the head of a giant monster, turned to stone, half in and half out of the ground. Even to us today, knowing what it is,

the remains of a T. Rex look terrifying. This creature is powerful, but trapped. Is it dead, or sleeping? Was it turned to stone by some protective force, or by an evil one? The dragon sleeping on its hoard, the monster to be battled by the hero, the trolls turned to stone by the rising sun – here they all are, real as can be, if misinterpreted. And here is the fatal flaw and crowning glory of humankind: our inextinguishable desire to understand things, no matter how badly.

Behind a glass wall, paleontologists and grad students were working to free more fossils from their millions of years of hardened dust, while answering questions posed to them by small children. The museum was full of small children, who seem to have an affinity for dinosaurs, as they do for science museums generally. Children are used to asking questions about things, as opposed to being embarrassed not to already know the answer. Then they become teenagers, self-conscious, sensitive to criticism real or imagined, sulking in the family car while their little sisters and brothers leap with joy among the science exhibits. But eventually curiosity wins over the teenagers, and some even grow up to become the staff behind the glass wall.

Because this is us. Stories of trolls and dragons don’t hold up against the questions we ask. It’s enough to give me hope when I read the comments section in the average news article, roiled with conspiracy theories and trembling with classic debating errors. Keep poking at that layer of petrified dust, people. If there’s a fragment of truth down deep, it may look nothing like what you expect.