A nice big February snowstorm did roll in at last. Over the course of a few days it heaped and layered itself across the yard, stacked itself onto branches, mocked the cars, trucks, and buses trying to cruise around like they own the place, and wrapped

familiar objects in semi-disguise. Some features were emphasized and some obscured, recognizable, but surprizing. 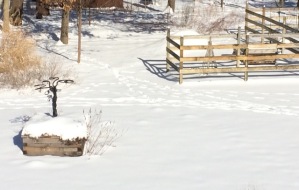 tracks of deer, not people

drawn by cross-country skiers, and a new track ambled in among the others: possum, a neat line of single-file prints despite her waddle.

And now I have learned one more incredible feature of Michigan snow: you can plant native wildflower seed by throwing it directly onto the snow in February. Amazing, right? But these are seeds that need freeze-thaw cycles to settle them in, and enough cold weather to recognize the change when spring comes. I had tried a fussy process called cold stratification, involving baggies, wet sand, and a freezer, but frankly I have enough mysterious baggies in my freezer without adding Jacob’s Ladder and Milkweed.

Then I got an email from Prairie Moon Nursery with a picture of a woman in a big down coat flinging handfuls of seed onto a field of snow. Do this until March,

it said. I had some packets of unstratified milkweed seed in hand, so out I went into the white, crunchy yard, where a cycle of thaw and freeze was expected to fill out the week. I didn’t have as much seed as the happy woman in the email, but it really was fun tossing it around like I was feeding imaginary chickens. In the imaginary barnyard. On the actual snow. I hope the neighbors weren’t watching.

I will let you know how this experiment turns out. I mean with the seeds, not with the neighbors.