A few days ago we had our first frost warning of the season, so I headed out to the garden with my Number 6 Felco clippers in hand. I cut all the flowers

that were in bloom or full-budded, all the green tomatoes that were at least half grown, 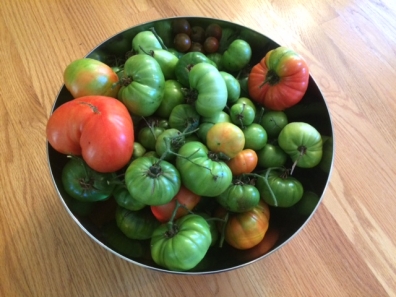 tucked the cherry tomato vines into their cold frame and closed the lid. I found a few last yellow summer squash – so much easier to find than those elusive zucchinis – and carried all this largesse into the house. I took in my poinsettias and the potted lemon tree.

In the morning there was frost on the front lawn and a skim of ice on the birdbath, but in the garden in the backyard there was no sign that the Angel of Death had been near. Zinnias, cosmos, tomatoes, and squash were still coming; and now an entire warm week is predicted, so the remnant will not only survive, but flourish.

I could just hear my severed tomatoes rebuking me: what are we doing inside on a day like this? Most will go on to ripen indoors, but not with the full flavor of joy that is a sun-ripened tomato’s birthright.

It’s hard to decide what to do with a first frost warning. Even taking into account overhangs and land contour, frost damage is not just patchy, it’s capricious. I chose to err on the side of prudence, unwilling to risk a sad morning of blasted vines, beds full of overnight-blackened flowers, tomatoes turned to mush. But the trouble with poets is, as the song says, we see poetry everywhere. No risk, no reward, in the garden just like life. I carried the poinsettias and the lemon tree back out, but once the tomatoes were off the vine it was too late for them.

So since I wasn’t willing to take risks, I will fall back on being resourceful. Fried green tomatoes, like my mother used to make.

At least I left the basil outside uncut.