Fall has always been my favorite season, which was frustrating when I lived in California. We had fall from about Christmas to New Year’s (after that, spring). Now that I am in the gorgeous country of blazing maples, golden hickory, and the self-explanatory burning bush, my October cup runneth over.

Seized with desire not to lose all these beauties, I take their photographs. Over and over again, and then they are mine. Taken; captured; the words used for photographs imply that I’m not alone in this irrational feeling that the image is the thing. 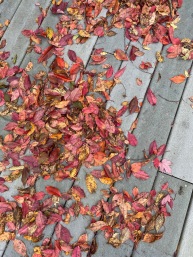 But what we possess in a photograph doesn’t come only from what’s physically in it. The colors and shading give the illusion of heft and contour, but a photo is a flat surface. The third dimension comes from us, from what we know about leaves and trees, and fill in –  just physically, not even counting the feelings we have about trees, about autumn, about color, about light, about darkness. Those come into it too. 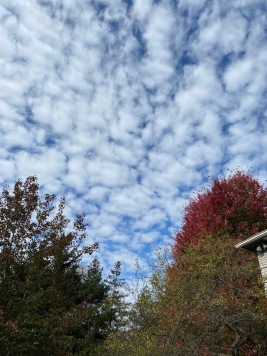 I take a photo of leaves on the ground, and I can feel my feet scuffling through heaps of them on trails and sidewalks.

I take a photo of a tree against a skyful of amazing clouds, and I think of my mother, and what she called a “buttermilk sky.” 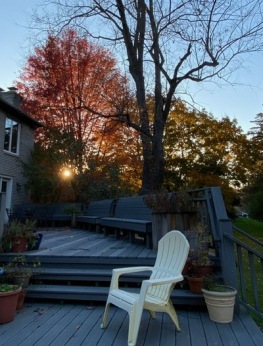 And this late afternoon sun speaks autumn strongly to me, because I know that three months ago the sun set on the righthand edge of this picture, far north of where it is setting now. It’s not just the color in the trees – summer’s heading south. Your particular associations may be different from mine, but you have them. That’s the part that’s the same.

Every fall I write about the leaves and most winters I cross most of it out. Here are two surviving bits.

Signs of the season,
lamps against grey skies,
flame to the blue,
they build into quick haystacks
on the ground.
The deep end of autumn,
leap in feet-first; it closes
over your head.

Ancient tree, eons of
synchronized passion
make the leaves fall
all together when they fall,
a chorus line dancing
to the ground, one,
two, three, kick.