I was weeding a flowerbed when the birds in my wild black cherry tree set up a racket of full-throated panic. It sounded like one bird was raiding another bird’s nest. How sad, I thought, and looked up into the tree.

It was very tall but, as wild black cherry trees in Michigan often are, ratty.

It had thin spots, jagged edges way up high, rambly bare twigs, but still managed to produce a bumper crop of fruit suitable only for chipmunks, a thin scrim of flesh over a fat seed.

I never suspected that tree to harbor as many birds as now came flying out of it, going in crazy circles, chirping wildly: wren, tufted titmouse, robin, cardinal, finch, jay, and others too obscured by leaf, noise, and movement to identify. Clearly some predator was afoot, or a-wing.

Zerlina, attracted by the hubbub, came to the screen door and I saw her eyes go big and round. What she saw before I did was a very large bird, flying out of the tree with something dangling from its talons, the tail of a something small and four-footed trailing behind it as it crossed my lawn. Not a mouse, Zerlina; a chipmunk.

It flew to the broad, sturdy, horizontal branch of another tree. It was busy now, holding its victim under one foot, beaking at it, sitting up now and then to look one way and then another. While it was occupied I went inside for my binoculars. The sound of the screen door caused the Large Bird to look directly at me as I raised the binoculars. Big round yellow eyes. Ear tufts. All the right markings. It was the Great Horned Owl.

Maybe by owl time this was a midnight snack. 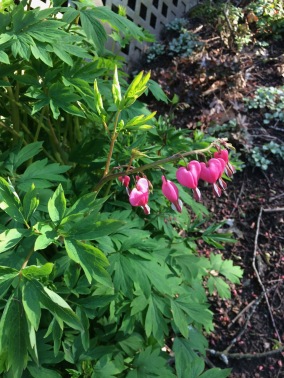 Were all those birds in that tree to start with? I’d never seen such a conglomeration before. Had they joined together to make enough fuss to drive the owl away? A battle plan from a random set of birds seemed like a stretch. Were they like bystanders at a flaming car wreck, drawn to see the disaster for themselves? Being human, all I can think of are human options. What was in the hearts of those birds?