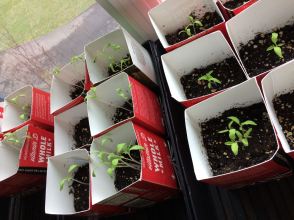 Meanwhile, in the upstairs window

Sometimes you need to back off and not think about anything for a while. Though solitaire is a game easily played with a two-dollar deck of cards, using a powerful electronic device and a fiberoptic network makes it feel more like someone else is playing it with you. For further justification, I have discovered Spider Solitaire. It requires two suits each from four decks, 104 cards in ten piles to start and eight piles to finish. Who has four decks of cards? How would I keep them all from sliding out of order and ending up on the floor? This was clearly a good use of my laptop.

It is a modest game. No one is killed, no thrones are violated, no treasure is amassed, and there are no consequences for winning or losing. I started with a feeling that competence would win out. Gradually I realized how unlikely it was that the cards I needed would turn up as I needed them. I began to suspect some entity knew what I needed and was deliberately withholding it. This used to be called paranoia. Today it’s called an algorithm.

Soon I realized it was a waste of energy to be suspicious. My object was to be playing a game. If I lost I would just play another game, which was the whole idea anyway. Did I really aspire to being a Spider Solitaire champ? Winning the game was immaterial. Therein was its charm: relief from the gloating frenzy of accusative winners mistaking accident for virtue.

When I do get all the cards in order, a banner comes up with a bright, cheery-looking “You Win!” Thank you, Spider Solitaire, for rewarding perseverance. It’s what we all need to do now. Persevere. Stay home. Play Spider Solitaire, and be safe. 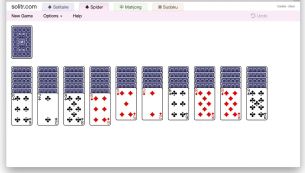 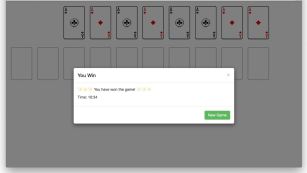