all photos are last year’s juveniles

I heard them before I saw them. “Dweeb! Dweeb!” they called mockingly to each other, voices high and screechy, almost like seagulls. My heart lifted. Juvies! We knew last year’s four-year-olds had sailed off to make their own lives, and we hoped Mama and Papa Bald Eagle had a new brood coming along, but spring came and went: the sky swirled with silent turkey buzzards, the yard vibrated with elegant songbirds, but the loopy, joyful, chaotic, confident chatter of the juvenile eagles was nowhere to be heard.

And now here they are, just in time for the Fourth of July. In their immature plumage, mottled brown and white without the gleaming head and tail effect of their elders, they own the skies, unconcerned with the other birds – which, however, become frantic about the juvies. The juvenile eagle siblings seem to care about nothing but playing with each other in joyful disturbance of the peace. 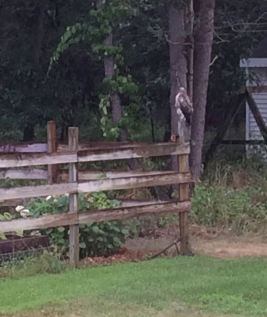 I used to hear the phrase “screaming eagle” and picture the bird on the National Seal with the arrows in its talons, striking out of the sky like a rocket. Reality is perhaps less majestic, but more relatable. Screaming is their song. Whatever else they use it for, they seem to use it to keep track of each other. Or annoy each other – after all, they’re siblings. And according to the National Seal, they carry a bunch of tickly olive branches in the other foot. I’m glad to have them back, even if they’re in the neighbor’s trees for now. I hope they come sit on my fence post again, terrifying the squirrels and bunnies into retreat.