They are slowing down as the hours of daylight decrease, but the tomatoes are still rolling in. And the squirrel, having acquired a taste for hot peppers, is still eating 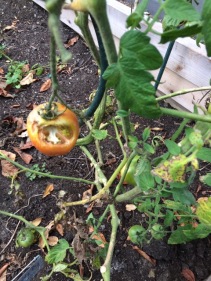 them. Sometimes when I stand at my kitchen window I see him out there, making free with the fruits of my labor. At first I would rush out in a rage to run him off, but eventually I realized this was useless. True, as soon as the screen door creaked he was gone in a flash; but screen door, rage, or not, once he had his three bites out of the tomato he looped off anyway. I could think of only two ways to keep him out of the garden: stay out there all the time; or put a roof over it. Not very practical.

In some years there would have been a frost by now, so I try to look at the abundance side of this situation: the tomatoes the Perp eats are bonus tomatoes; those 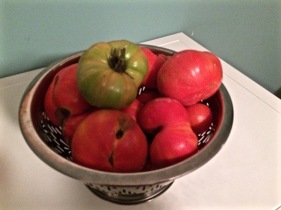 he leaves behind are tomatoes of pure grace. Even the ones I pick half green and ripen in the house in an attempt to defeat him, are way tastier than common supermarket tomatoes. Supermarket tomatoes are not bred for flavor – they are bred to withstand the shipping and handling necessary to sell them in supermarkets, as they have to be, since no one would buy them in the bruised and leaking condition a garden tomato would demonstrate when so shipped and so handled. We need to keep this in mind before we scold supermarkets. Until someone invents a tomato transporter to beam them into supermarkets directly from farms, supermarket tomatoes will continue to be bred for sturdiness.

My squirrel, who seems almost able to beam himself into the garden, appears to have been bred for persistence. Did that first tomato burn your tongue? Try another. That one too? Keep going. How can I argue with desire that will fight through the pain of fire on the tomato skin, to get to the luscious heart inside it? I’m not sure if it’s fear that motivates him to flee at the threat of my approach, or something more like taunting. He is a Siegfried of squirrels. Unless I am wrong about his gender, in which case she’s a Valkyrie.