Over the weekend Doug put another round of cedar planks on two of my raised garden beds. I lugged a few hundred pounds of dirt into them, and though they could have used more, I planted my tomato seedlings anyway. They were getting leggy indoors. The Supersteaks had grown so tall they already needed staking. 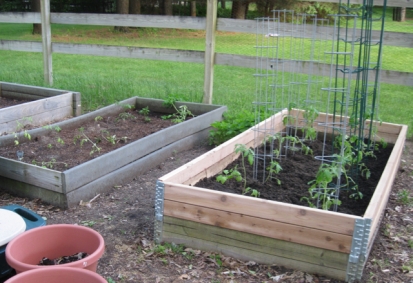 Here they are with tomato towers from two manufacturers: the galvanized ones from Burpee are heavier gauge, so they stand up to windstorms better; the green ones from Gardener’s Supply, which they call tomato ladders and which stack, are taller and support the tops of the vines better. I don’t have a favorite between them, and never having been one for matched sets of things, I like mixing both kinds. I have a third type of stake, too – the spiral kind – which I will deploy for the other tomatoes. I don’t use tomato cages. They make it too hard to weed, and anyhow, I like to claim I have free-range tomatoes.

Speaking of weeds, a number of them snuck into my herb garden, so I’ve also been putting time into evicting them. It’s the herb garden that’s really free-range, right out in the open because deer won’t eat fuzzy, scented leaves. Except for getting weeded

now and then, it really fends for itself. It has a long season, providing sage for Thanksgiving dinner and thyme whenever not covered with snow. The lavender, garlic chives, and chamomile are self-supporting, and it also boasts monarda, russian sage, and shasta daisies. The only annual is – or, will be – basil, various kinds, colors, and sizes. As soon as I get the aforementioned weeds out of the way.

Another area getting my attention now is the woods. I have vastly reduced the amount of garlic mustard growing there, but eternal vigilance is required, as many of the neighbors upwind are not so careful. I don’t so much weed the woods, as curate it. Pulling the garlic mustard has made the ferns very happy.

The lovely tall flowers blooming all around my chair here are dame’s rocket – not phlox, as I thought when I first saw them. Many people put them on an equal footing with garlic mustard and react to them with horror, but they are way less trouble, much easier to keep out of places they’re not wanted. And the deer don’t eat them, which is not true of phlox.

And then there’s the front yard. No time for that right now.