September is the easiest, most rewarding time to be a gardener in Michigan. Weeds have slowed way down but the tomatoes are really rolling in. The yellow squash and eggplants are doing the same. Their leaves may look ratty, but my biggest garden chore is tying the plants up and harvesting their bounty every day. 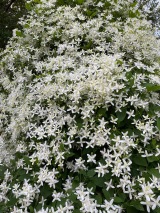 Many summer flowers have given up, but the Autumn Clematis that previously did nothing but try to swamp my asparagus, is now in full gorgeous bloom with sweet, sweet scent. 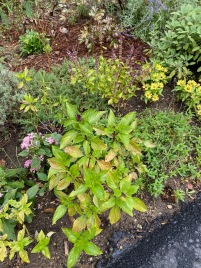 The basil in the front yard shows tinges of its coming shutdown. I’m letting it flower now, since at this point it’s a toss-up whether the basil will go to seed before the frost gets it. The sage in the upper righthand corner of that picture, however, will continue to stand, proudly flavoring the stuffing and festooning the platter of the Thanksgiving turkey. It will still be leafy in the snow. I’ll trim it back in spring when the new leaves start coming out. 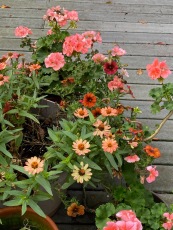 The zinnias and petunias will bloom until frost, and the geraniums will keep them company until I bring them inside for the winter, but I do have to start watching the weather forecasts for frost warnings.

A well-known poem of my childhood was the story of Jack Frost, who came with a paintbrush, unexpectedly and unseen in the middle of the night, and everywhere he went he left a trace of red or gold on the leaves of trees.

The poem never said whether his brushstrokes were deliberate, and I always imagined them as accidental. I thought Jack Frost was on his way somewhere else with that paintbrush, with something else in mind, and slopping a little color onto the trees as he went along just happened. It looked that way to me then, and it looks no more deliberate to me now, though I’ve learned, as a gardener, that the color change doesn’t necessarily come with a frost. No frost here yet, but there’s a slash of gold on the weeping cherry in the front yard, a spatter of red on the wild black cherry in the back, and I think of that paintbrush, trailing glory like grace over a world that can certainly use it.