The three-year juvie eagle was sitting atop my chimney this morning. An assortment 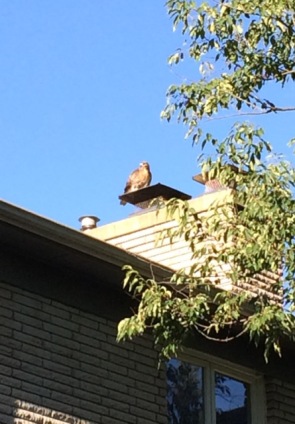 Mr. Juvie Eagle, not bald yet

of small birds that nested nearby were dive-bombing him in panic and outrage, trying to drive him off. He was busy with a very extensive grooming session, beaking and smoothing away at his chest, his shoulders, his tail, completely unperturbed by these dinky birds, whose eggs and young would not have made a decent snack for him.

And so the National Bird held himself above the fray.

Down on the deck my Fourth of July decorations are still flying. There was a time when I was not enthusiastic about the flag. During the Viet Nam war, supporters of the war adopted the flag as their emblem, defining patriotism as refusal to evaluate whether one’s country was perhaps making a mistake. They hogged up the flag to the point that you couldn’t be seen with one, without being taken for a war supporter. My anti-war friends and I shunned the flag.

Then one day Senator George McGovern, a prime opposer of that war, appeared with a flag pin on his lapel. The assembled reporters went wild, assuming it meant he had switched sides. “Why are you wearing that flag?!” they called out. Senator 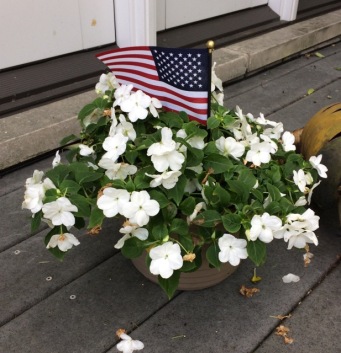 So I learned not to cede worthy symbols to opponents.

It’s as true now as it was then, that you have no claim to loving the nation if you hate half its inhabitants. And as Peter, Paul, and Mary once sang, “there is no freedom in a land where fear and hate prevail.”

I watched the eagle for a long time, hoping to get a photo when he took flight. But when he was all preened and ready, he swooped off the other side of the roof, out of my field of vision. I couldn’t see him as he went, but I have faith that he was flying.

2 thoughts on “A Yard Full of Symbolism”